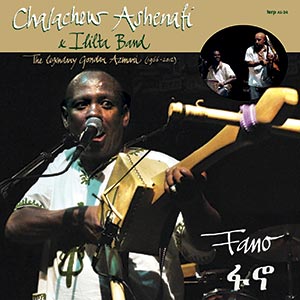 Azmari songs are primarily aired at celebrations such as weddings, and on the whole this seems to infuse the music with a bubbly, positivist air. The lyrics can get naughty, or sound slightly surreal to Western ears, but it’s all part of the fun.

Azmari songs are primarily aired at celebrations such as weddings, and on the whole this seems to infuse the music with a bubbly, positivist air. The lyrics can get naughty, or sound slightly surreal to Western ears, but it’s all part of the fun.

The Ex are many things; the true (and criminally neglected) ambassadors of all that’s good and important in Dutch independent music, a great example of how to live from your art and not lose your soul, and facilitators to a lot of Ethiopian music that would otherwise go unnoticed . This last psychicke service that they provide – the “African Series” of releases on Terp Records – is Terrie’s project; (at least I presume so as the “Terp Records” moniker  sounds suspiciously like it is his baby, and doubtless he’ll tell me if it isn’t), and damned fine the whole thing is too. And we have two new releases to talk about, from two musicians who are no longer with us; both from Azmari musicians;  Chalachew Ashenati and the “court jester supreme”, Bahru Kegne.

The release that makes the biggest initial impression is the Chalachew Ashenati LP and that’s because, unlike Bahru Kegne’s LP, it’s recorded in a studio, (in exotic Wormerveer no less).  It’s also extremely effervescent stuff; Azmari songs are primarily aired at celebrations such as weddings, and on the whole this seems to infuse the music with a bubbly, positivist air. The lyrics can get naughty, or sound slightly surreal to Western ears, but it’s all part of the fun. Tey Demam -a killer track – is a song of praise for his hometown, the beauty of the place, the quality of the food; he really does the place proud. We get similar celebrations of place with the beautiful (and supine) groove Memeyew, too. And Munit is a song praising a girl spinner; lines like, “And if we do scramble for her / I will go for the part round the navel”, have a sort of cheekiness that makes you grin.  Even when we get subject matter which could be construed as maudlin – or an arrangement that could be seen as a bit of a slog to us Urbanites – such as Tew Tew 1, a long soliloquy accompanied only by Masinko – there’s an India rubber spirit of defiance present that never lets up and keeps you, the listener, hanging on in there.

Given the narrative nature of the songs, the music is incredibly linear and often happy to string itself out on a scale like a python coiled round a tree. Now and again things get ridiculously groovy. I mentioned the groovy pop of Tey Demam earlier and you need to check out the brilliantly hip shaking quality of the martial song, Hailoga, which really does have a juddery, snappy (dare I say it Jagger-esque) strut to it. Most of all, give some time to Mushiroch Mare, which is possibly the LP’s highlight. This is a tough, snaky groove that could be something that could have easily come from Radio Gnome era Gong. Ex guitarist Andy Moor adds a corrosive and incredibly direct guitar line to add some meat to the bone. Fab stuff. 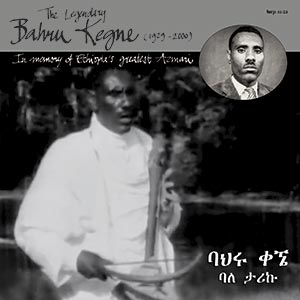 I hinted earlier that the release from Bahru Kegne was a bit more of a challenge, but it’s well worth it once you settle down to the fact that the sound can be patchy and slightly muffled.  Anyway that analogue hiss is all the rage I hear. And once you read the sleeve notes you will be intrigued; according to Terrie’s text, Kegne was an artistic “constant” throughout a turbulent period in the country’s history performing for the local farmer, the Emperor and Communist Dictator Mengistu alike. But what makes this a must listen, what gets you really hooked is the fact that Kegne uses synth and drum machine to devastating effect; he creates a sort of electronic raga, mystic, and intense.  Tracks like the opener Sela Beyligne and the bubbly Endet New Gedawo are absolutely brilliant; Kegne’s vocal style adopting a sort of high priest role while the synths slip and slide underneath. It’s astonishingly direct and so bloody simple that you know it’s unique, unrepeatable.  At times the psychedelic quality inherent in this sort of sound slips out of the cracks to sun itself. Tracks like Ye Gebere Leza and (the naughty)  Bati – somehow – have a lot in common with Silver Apples, maybe it’s the puckish, space cadet quality (albeit from different ends of the spectrum) that’s inherent in both, maybe it’s the wibbly electronic backdrop. Sometimes the maudlin tracks like Derbabaye have this sinister, soporific quality to them, the danger of you being lulled into a catatonic state is mostly due to Kegne’s incredibly expressive voice, which seems to have unseen reserves of strength. This record has a hell of a lot of dignity too; I just can’t see how you could appropriate or incorporate this kind of music into a Western tradition say, because it’s not made for faking, you can’t get away with lifting elements from it wholesale. 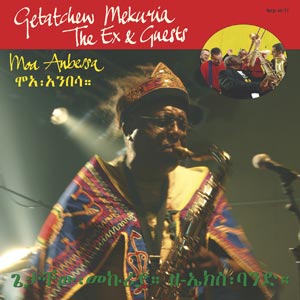 There are many others in this series which deserve your attention, but I’ll quickly pick just one which you must all hunt down; that being the magnificent collaboration between Getachew Mekuria and The Ex & Guests. This is a mix of Ethiopian sax virtuosity from Getachew, brass and that itchy punk/post punk guitar sound; all of which somehow manages to create a clattering, crashing record that can get addictive. The opener Ethiopia Hagere is a stomping, and ever so slightly camp curtain raiser, bulldozing everything in its tracks. Elsewhere, Che Belew Shellela is a ridiculous hop that grumbles and growls, forever skipping or stumbling round a mix of irritated guitar textures, a jalopy beat and a sax line that in turn cajoles and canoodles with the listener. Capping all is the epic 8 minute prowl going under the name of Aynotche Terabu, a real slow burner that turns into a classic GW Sok polemic. But really it’s a shame to pick out tracks of this LP, as it’s a brilliantly compact and enervating listen.

Track this stuff down, it’s not your normal cup of tea but you’ll grow to love the taste, honest!