Some use music as a way (by telling others what’s ‘cool’ or ‘important’) to show how important they are. You never see these gadflies, these Osrics, on a cold Tuesday night in a converted bike shed in a Leiden squat.

Some use music as a way (by telling others what’s ‘cool’ or ‘important’) to show how important they are. You never see these gadflies, these Osrics, on a cold Tuesday night in a converted bike shed in a Leiden squat. 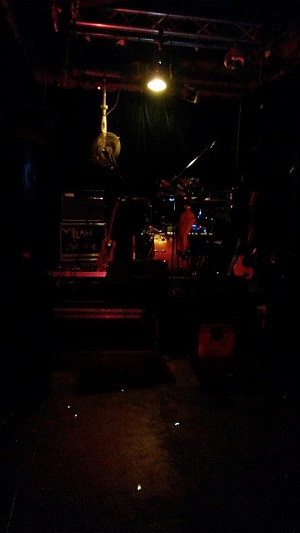 What was the old phrase about best laid plans? Yeah. I tell you what if you ever needed an example of the underlying drudgery of rock and roll at the coalface then this Vin Blanc show was it. Some people are drawn to (and still try to prop up through writing/tweeting/bullshitting/self-deception/self-importance) the whole glitzy, ‘road paved with gold’ rock dream stuff. Some use music as a way (by telling others what’s ‘cool’ or ‘important’) to show how important they are. You never see these gadflies, these Osrics, on a cold Tuesday night in a converted bike shed in a Leiden squat; watching a band who’ll be in Lille the day after and who are worried that they might be playing to 4 or 5 half-interested people; a band dependent on a sofa for a bed and a vegan meal served up by well-meaning anarchists. A band who are actually quite well known and well considered by some. That’s where a lot of popular music operates these days. The rest is – to a certain extent, and yes we are all complicit in it – marketing, to keep that first world dream turning.

Let’s talk about the show. SUB071 is legendary we all know that, but tonight was one where its legendariness was not apparent; due to 1) the amount of people NOT here dramatically outweighing the amount of people here and 2) the lingering smell of bleach which didn’t dovetail with the bare walls, the bright light in the minuiscule foyer and the fag ends littered about. Oh dear. I thought this would be a full show. Never mind, after a few nervous looks from the band, and with a few of the vegan kitchen dudes (including one small fella who was tripping, or deranged, or a potential axe murderer) pressed into audience action by Double AA’s Marcel (who was factotum for the night), Vin Blanc just did what they are good at and cranked out their lofi showbizz punk.

And what a show, it really was; born from a ‘show must go on’determination, a realisation there is nowhere to hide, and a confidence in their own music. Let’s talk about their music, that’s really what held people in the room at SUB. Their music is just so appealing; a brilliant car crash of vaulting, star-struck chords and melodic phrases balanced against these funny crunches and thumps supplied by Fritz Brückner. There’s one track where the two have a competition who can make the biggest, most crunchy beat; fighting over some electric-beat-pad-instrument thing I don’t know the name of. This one really gets the vegan punks going; their hoodies may still be up and their hands are still thrust deep in their pockets, but they are totally wrapped up in this tribal bash-off. I think what’s really fab and grabbing people is the way they use the different timbres of, or sounds coming from, the percussion. It’s actually very novel the way they don’t flood the rhythm but flood the guitar and synth parts, leading to this inverted sound where the thumps and bangs lead rather than the (often) very appealing melody, or Joe’s stagey games. It’s restless music that also informs and charms.

And the tension Vin Blanc created between getting the pop message out to us hardy 11 souls (and 2 dogs) AND whacking out a tough, sometimes savage racket was really, really great to experience.

In his ‘very queer book’ The White Goddess*, Robert Graves made the distinction between the professional, ‘kept’ poets at the ancient Celtic/Welsh courts and the gleemen. The latter were feral poets or soothsayers; the out-of-bounds entertainers who would turn up and entertain the village or the court with their ur-shamanic lore. In some ways that’s where Vin Blanc are; the gleemen battling against, or looking to find a place in the world of the professional poet. When you see the singer Joe Haege kneeling on the floor in prayer position, going through some mock-Sinatran, showbizz catharsis for his audience, while his posterior is being sniffed by 2 curious hippy dogs, you see the two worlds collide in real time.

*His words not mine. TWG is Graves’s ‘poetic’ attempt to understand the historical artistic genus of poetry.