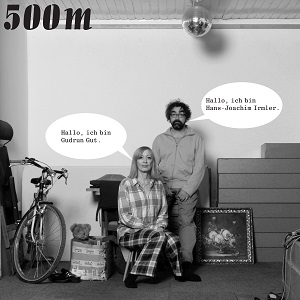 As ever with the things that Gudrun Gut is involved with, this is a patient and very sexy record.

As ever with the things that Gudrun Gut is involved with, this is a patient and very sexy record.

Gudrun Gut and Hans-Joachim Irmler; two names to strike fear into the hearts of any faker. And their collaboration is possibly one of the records of the year. Time and tide has stopped me writing about it before this but hey, there comes a point in everyone’s life where due respect needs to be paid to this record, and now a review must be offered up.

What’s so special here? Well, as ever with the things that Gudrun Gut is involved with, this is a patient and very sexy record. And one with a considerable trickster kick. I’ll look (in as methodical a manner as a Brit can summon) to deal with each characteristic. First the sex. The accent (even the grates, scratches and thuds provided by Mr Irmler on things like Chlor and the majestic Parfum) are set up to give off this sultry, sensual edge. Let’s also note that Gudrun’s whisperings on Traum and Auf un Ab are up there with CS Lewis’s White Witch in their ‘fuck it I know it’s bad but what the heck,let’s do it’ suggestiveness.

What next? oh yeah, the patient element I mentioned. Well, everything is measured carefully to provide a sense of unease, but its a stealthy one; pretending to be nice and strokable, and maybe with the promise of something more. Tracks like Fruh and the beautiful, ever-evolving soundscape that is Traum keep their claws in for the most part. Talking of time, there’s also a definite feel of future-past on here; a sound echo of the German Autumn era maybe, whispering in the ear of with the bright, clean, inoffensive tea drinking urnbanites that set the agenda in the country nowadays. Listen to this in Mandarine and Noah were the weepiness and ‘olde tyme’ synth fuzz balance against the syubtle beats laid down by Gut. Irmler’s ramblings in Noah don’t half conjure up the image of a long-forgotten prophet, too.

The kick is provided in the most part by Parfum; one of those very moreish dance tracks that Gut seems to specialise in. A Golem made out of the most brazen of beats and the subtlest of counter beats,it stamps out its identity with determination and ruthless efficiency. Even better, round 3 minutes in it sets out on flightpath courtesy of some harmonic mid tempo fuzz, and shoots off into the night sky. An incredible, slient, sludge-house take on Roxy’s Bogus Man dark side. It’s also got a bit of Death in Vegas in it, albeit without any of that lot’s rawk pretensions and posturing.

After this we have a briliantly horizontal comedown. Brueke mixes subterranean rumblings and ripples that Gut finds so pleasing with noises from (I think) Faust IV. The whole thing sounds like a fly banging around inside a central heating appliance. 500 Meter is a sort of lament for things we should, but can’t grasp. Gut sends us off into space without anything so much as a backwards look. Talk about being out there.