Decline feels like a huge work of progress (and insight into a zeitgeist) that is now stranded.

Decline feels like a huge work of progress (and insight into a zeitgeist) that is now stranded. 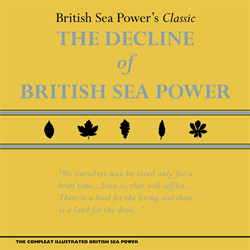 It’s the birds of prey on the CD wot did it. Auguries of what? The raptor silhouettes still look like they mean something, flying in formation to an unknown destination. Maybe they were silent witnesses to the fact that British Sea Power were always a smoke and mirrors band, meaning “something”, somehow, but at the same time making, and acting out a music that led to a raft of different interpretations. It’s the thing that made – and still makes them – special. Personally, listening to this LP led to a decade’s worth of daft adventure, many new friends and a final confirmation that vodka and brandy should never be mixed.

Listening back now to this deluxe reissue with the B-sides (how old THAT retail proposition sounds!) a few things do seem clearer. The second CD shows one thing, that Decline was made as a shock, a statement. Adding brilliant vignettes like Moley and Me, Salty Water or Smallest Church in East Sussex to the record proper would have given an entirely different character to the debut. As it was the pace of Decline still startles and elevates; and the listening process is (to return to that spirit-based BSP Ragnarok in Sheffield in 2006) remarkably like snorting vodka. Apologies... and Favours in the Beetroot Fields are a smash and grab act akin to a lightning flash; a borrowed and fiercely burning energy that gives way time to a set of goggle eyed, multidimensional moments of reflection before a final surge of chest-beating daftness (with the brilliant Lately, still their signature tune) and a bovine acceptance of your fate.

How strange to write about them in the past tense though. Maybe appropriate this once, as Decline is a remarkable record and one whose place in the scheme of things still seems to be “mauve”. A tectonic work, maybe; and one that – like the Long Man of Wilmington (to compare it with another mysterious Sussex-made future-past artwork) seems to stand on a threshold; preserved in a past whilst hinting at a future it has no part in. How faraway they both seem. Both confirm there is a land for the living and a land for the dead; even if, in BSP’s case, they signify dead fashions, dead modus operandi.

In Do It For Your Mum, his captivating book on the band, then-manager (and brother to Yan & Hamilton) Roy Wilkinson – aka Old Sarge – documented the way the band signed to Rough Trade and cut this LP. It sounds like a tale from another age altogether. The sounds on both the LP and the CD of the B-sides have this pre-digital quality too; there’s nothing on Decline that could hint to being made in the C21st. At the time this was incredibly exciting and weirdly liberating; allowing (as stated earlier) a host of different approaches to its audience. A reboot of 80’s New Order / Bunnymen / Pixies worship, a vague teenage sentiment about the past that could be reused as a fashion, or a clarion call proper daft behaviour. It was all there. And it all felt like a Year Zero of sorts, even if only for 6 months. Or maybe a Year Zero that allowed a final closure of, and for, the past.

But how strange that – in this age of curation and reassembling of rock’s past – that a band that effectively mapped out the current consensus for re-imagining the alternative 1980s seem to be locked out of the party they invited everyone into. But maybe the reissue of this brilliant LP allows it a resting point. To nab a nautical theme Decline feels like a huge work of progress (and insight into a zeitgeist) that is now stranded; akin to Brunel’s Great Eastern stuck out in the Mersey estuary, a monument to self-taught brilliance and headstrong adventure. The sort of qualities that are unappreciated in our timid times.